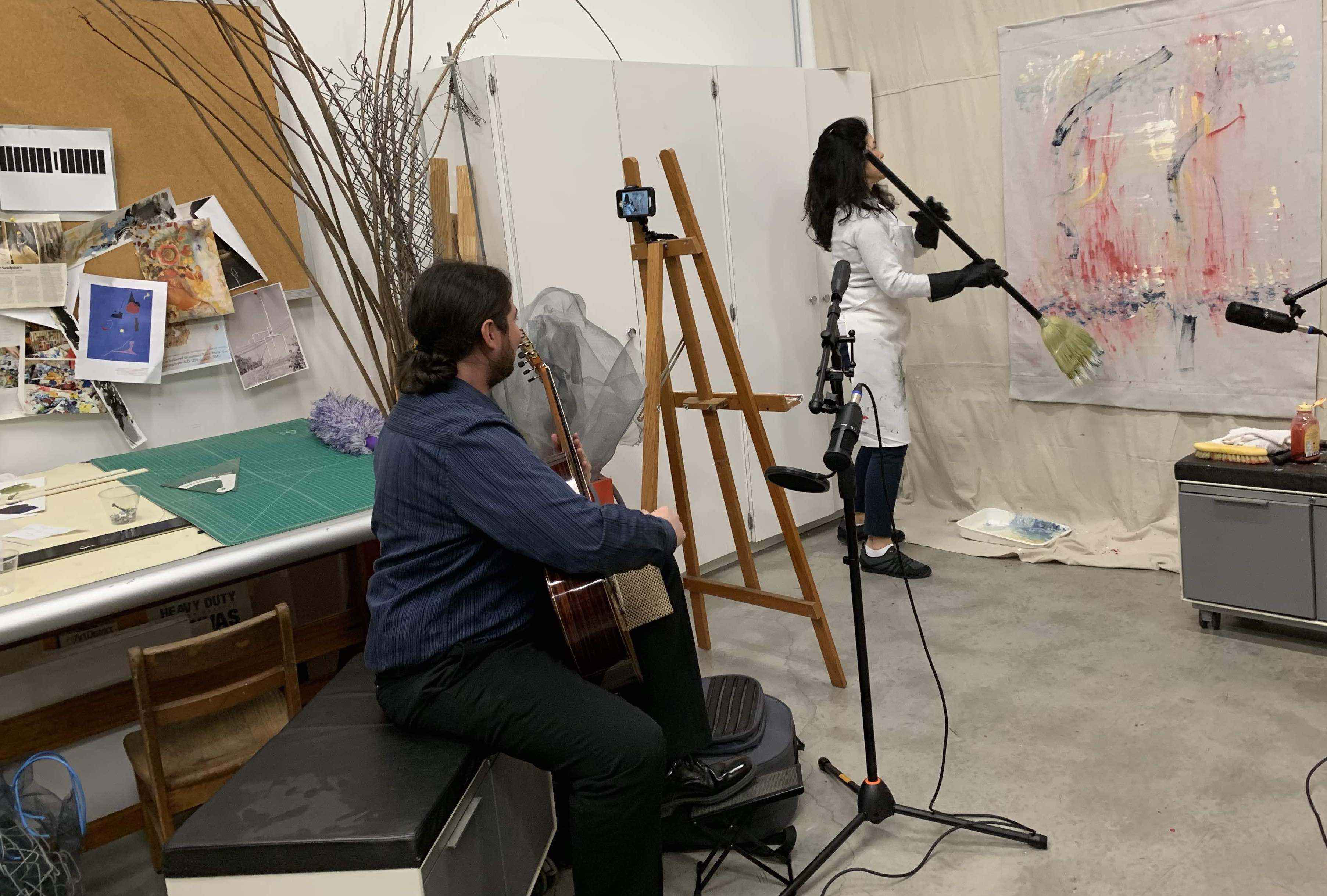 Although our Speed-Composing Challenges have resulted in two wild world premieres, for our latest episode of Inner Chamber, I sat down with not a composer, but an artist. It came to me in a flash of divine inspiration: ever since I met Geraldina for the first time to interview her for Questions+Artists, I had been wishing that I could go back in time and record our entire conversation, which had been chock-full of inspiring ideas, artistic similarities, and wisdom. A few weeks later, it hit me: I have a podcast! I can do whatever I want! And that’s how “Improv Art” was born.

Since Geraldina had mentioned that she painted to classical guitar music from time to time, guitarist Marc Rosenberg was my knight in shining armor when it came to this crazy, halfway-thought-out project I was planning. I knew he could shred any piece of music, like he did at Musiqa’s last Loft Concert at the Contemporary Arts Museum. After a quick email explaining the idea for the podcast, Marc was game to be a part of it. We met at Geraldina’s studio — which is full of art that becomes even more breathtaking the more you see it – and set up for the first portion of Inner Chamber: a discussion between Geraldina, Marc, and myself about pretty much anything that comes to our minds.

“I don’t even paint horizontals, because I don’t want a horizon line. I’m really trying to take your brain away from what you expect to see in life and take you into another world.”

“I think of atmospheres — colors and characters — more than anything else.”

“I’m not afraid of any learning curve, but there are choices I have to make. Do I learn it, or do I collaborate? My big thing nowadays is collaboration, which is kind of what we’re doing right now.”

After winding our way from Marc’s top three electric guitar inspirations to Geraldina’s childhood in El Salvador, and from their shared love of classical guitarist Pepe Romero to the idea that humanity itself is collaborative, it was time for the performance portion of the podcast. We set back up in Geraldina’s workshop space for Marc’s performance. First up was the first movement from  “Dos Aires Pompeanos” by Jose Luis Merlin: a gorgeous, poetic melody enhanced with pristine counterpoint. The next piece was by Ernesto Cordero, titled “Descarga.” The piece consists of five movements, each titled a different emotion: Joy, Tenderness, Faith, Nostalgia, and Courage. As Marc described it, Cordero “takes you on a roller coaster” throughout the piece, and by the end of it, my heart was full of just a little bit of each movement’s character. While less romantic than the Merlin, I loved Cordero’s roller-coaster ride of a piece.

Finally, it was time to bring my idea — a collaborative project that would result in a world premiere work of music and a new work of art — to life. Geraldina started mixing paints, and my eyes lit up as Marc’s looked on nervously.

“Do y’all have any questions?” I asked them. They both looked at me like I was crazy. I shrugged. “I don’t really know how this is gonna turn out, but I think it’s gonna be great!” I set up a microphone by Geraldina’s canvas so that our audience could hear the scratching of her brooms and brushes, and another one by Marc, and gave them the thumbs up to go for it.

Seeing an artist and a musician collaborate live is astounding. It’s organic in a way that we never see in the world of fine art and classical music. It’s questioning, tiptoeing forward as one collaborator soliloquizes and the other listens intently, interjecting only to embellish. When both performers gain confidence, the electricity in the room is palpable. Maybe it was late, and maybe it was the inherent sense of home that listening to a guitar gave me (“every culture has a guitar-like instrument,” Marc said, and in kind, its familiarity permeates each culture), but it’s impossible to describe just how breathtaking it was to be an audience member to Marc and Geraldina’s creative process.

“Wow. Just, wow.” Wow, wow, wow!” I started soft, but then I started shouting, and pacing, and smiling uncontrollably as I took in the finished painting. “That was amazing, y’all!” They seemed happy, but at some point both of them asked, “What exactly happened?”

I suppose I have the unique privilege of being present as the only audience member in the room for the creation of Channeling Las Americas: Improv Art and Guitar. Not to worry, though, because I got the whole thing on camera! You can find the video for Channeling Las Americas HERE, and the podcast episode itself HERE.